There’s so much you can do with posts like this.

Of course I realise these ideas are far from revolutionary or terribly original; I just decided to include them because I’ve often been asked when sharing similar links how I mean to use them in teaching. I’m sure those who asked are perfectly able to come up with their own suggestions but were probably interested in my take on the issue – so here we go.

Please fee free to use or discard any of the tips above; at the same time, I’d be keen to hear your ideas – please comment below.

Here’s an excellent post from Adam Simpson’s blog on How to get 10 grammar teaching activities from one video clip. The tips in the post will work with other videos as well, not only with the one presented there. Very good, practical ideas, covering various grammar areas – overall an extremely useful and original post, so check it out. 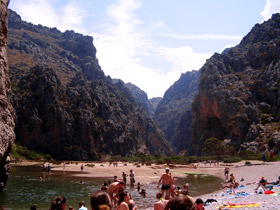 Students come to the first English lesson of the new school year expecting the inevitable: the teacher asking them about their summer holidays. Justifiably, they’re bored with it. Here’s a twist to liven up this old routine: 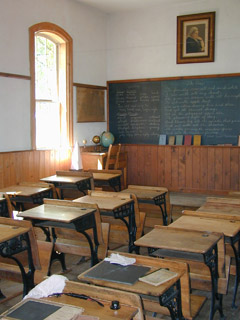 My first English teaching job was in a primary school. I still have nice memories of that time as I learnt a lot there – including the lesson from the incident that I’m about to tell you about.

It happened in the spring of 1990, my first school year there. We were doing a speaking activity; the kids were in pairs – I don’t remember the exact details but it was something in connection with a picture (I’ve always liked using a lot of pictures). If you’re an English teacher, you can easily picture this familiar image: pairs of kids turning towards each other talking, with a teacher crouching over one pair, listening on. I must admit I was pretty pleased with the way things were going as it was our first year together and it was not that easy to get them to talk, but this task seemed to be working very well.

At this moment, the principal entered. I didn’t notice him; neither did the kids. We only looked up when he said: “I thought there was no teacher here.” I assured him I was there – then he asked me to see him afterwards. Later, in his office, he said: “I heard a lot of noise coming from your classroom when passing in the corridor, that’s why I went in. Can’t you keep order and have them remain silent?” I think my response surprised him: “I’ve been working hard for seven months to get them to talk and I’m glad you noticed the result, thank you very much.”

For reasons that will become clear very soon, I’ve changed all the factual details in this post.

A few days ago I received an e-mail with a rather disturbing subject line: “Please don’t use the circumstances of my father’s death in your exercises”. The sender explained that he felt it was “cruel and unkind for his family and particularly his children”.

Incidentally, the said exercise was not online on any of my sites (and had never been), but this is not the point, as I was responsible for creating that exercise (a cloze test, to be precise). Years ago I sent it to a mailing list for English learners and somebody decided to post it on a website belonging to a school in one of the former Soviet republics. The page (and the whole site) had no contact information except for my name so it was reasonable on his part to assume that I had put it online – but I hadn’t. Actually, I think it was copyright violation on the school’s part – not that it matters, really.

I apologised to the sender and promised to change the names in the exercise – but that’s when I realised that I didn’t actually have it online. I explained to him that I have nothing to do with the site that published my exercise and I can’t even contact them. Unfortunately, he said I was missing the point and I shouldn’t have created the exercise in the first place and called my choice of text “rather insensitive” and “somewhat morbid”. Let me make it clear that the article (taken from a local newspaper in his country) was not about the sender’s father; it dealt with the person who was found responsible for his suicide in a hospital. The 500-word article mentioned his father’s name once and that he was a patient at that hospital – in half a sentence. No details about the suicide or the circumstances were mentioned. The tone of the article was completely non-sensationalist in style; it gave a matter-of-fact overview of the events and concentrated on the moral and legal consequences. The sender came across the page when searching for his father’s name plus the name of his town (he shares a name with an actor so without the name of the town this 17-year-old story never comes up).

Still, I felt ashamed, as it was never my intention to hurt anybody’s feelings, especially in connection with such a tragic event. And my dilemmas start here…

In the future, if I change the names in articles like this, how do I make sure that those made-up names don’t belong to living people, who might equally (or even more!) be offended? Do I make up totally nonsense names? That would make the text look ridiculous. Do I change the names to AA and BB? That would ruin the language. Do I replace the names with references (“the manager”, “the victim”)? That would change the style and language of the original article and would make it sound unnatural.

And where do we draw the line when choosing potentially sensitive texts to work with? Of course, this can only be decided on a case by case basis – everything depends on your perceived audience and your teaching goals. But when creating exercises for online publication, where theoretically the whole world is your audience, should we completely refrain from using anything that might be controversial in this respect?

Frankly, before this incident, I only had my students in mind when deciding whether a text was appropriate or not. Now it seems that maybe we should take another factor into consideration. Or should we? This person was obviously looking for sites dealing with his father’s suicide 17 years ago. Why now – I don’t know and it’s probably none of my business. 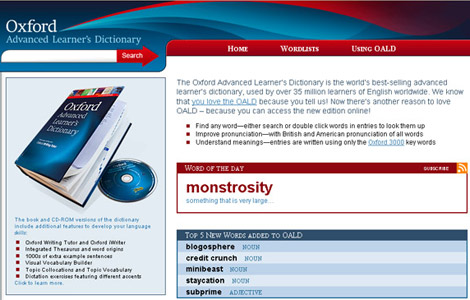 The elegantly simple design lets your students focus on the main thing: the search box in the top left corner. On typing staple and clicking on the Search button, this is what you get: 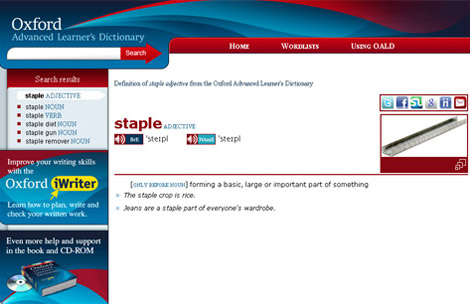 From the box on the left choose which staple you’re interested in – as you can see, some headwords have picture illustrations too (funny though that the image of staple as an office tool is shown for the adjective staple), and you can always listen to the pronunciation in both British and American English, plus you get the phonetic transcriptions.

Most (if not all) words come with sample sentences, and when necessary, the definitions are accompanied by a special note; in this case, for staple: “only before noun”. 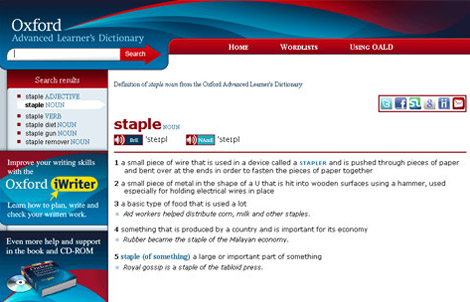 Above is a screenshot of the the staple (noun) page – you pretty much get what you can expect: clear definitions and carefully chosen sample sentences.

A very useful feature of the site is the Oxford 3000TM – a list of the most important 3000 words for learners.

You can also subscribe to their Word of the Day feed and get a new word in your reader every day.

Of course, there is still a lot left out that you will only get if you buy the printed dictionary and its accompanying CD-ROM but you can’t blame Oxford here – this online dictionary is such excellent value that we can only thank them for making it freely accessible.

From the IATEFL LT SIG:

The IATEFL LT SIG would like to invite you to join the ‘Virtual Pre-Conference Event’ (VPCE) at http://iatefl-ltsig.ning.com/

There are 6 weeks left before the 44th annual IATEFL conference in Harrogate, UK and in the run-up to the conference, we have decided to hold a ‘Virtual Pre-Conference Event'(VPCE)
The focus of the Pre-Conference Event (PCE) this year at the IATEFL conference is to consider where we are in the field of learning technologies and language learning and where we might be going. Have we reached a time when learning technologies are a ‘normalised’ part of our practice or is there still some way to go? Are there any predictions we can make about the future?

We have asked three people – Stephen Bax, Scott Thornbury and Mark Pegrum – to help us on April 7th with short focused presentations during the day at various points to seed the debate. Stephen and Scott will be in Harrogate, Mark will be online.

Before then, the VPCE will be examining where we are now, with 6 weeks of discussions and practical ideas involving on how to use Web 2.0 tools in your classroom.

Linda Bradley and myself (Sylvie Thousny) are proposing an edited peer reviewed eBook focusing on second language teaching and learning preferably using online technology. Online technology here refers to web-based computer applications and Internet technology in all its forms, including, but not limited to for instance:

Targeted to young researchers, having just completed or nearly completed their PhD, the eBook will be digital rights management free and accessible online free of charge.

If you are a young researcher, we would like to invite you contribute to this eBook. Please send a 500-word abstract to ebook@icall-research.net by the 31st of March 2010, along with your name, affiliation and email address. The abstract should be submitted electronically as either a Rich Text Format (.rtf) or Microsoft Word (.doc) file. Abstracts and manuscripts will be peer reviewed to ensure that the articles to be published represent the best scholarship currently available.

We look forward to hearing from you!

These workshops are run by EVO, Electronic Village Online, which is part of the American-based TESOL – Teachers of English to Speakers of Other Languages.

There is nothing quite like these workshops – visit the site to see the range. They are thoroughly international, run by experts – thoroughly recommended.